Suicide rates are 70 percent higher in rural areas than urban ones, according to 2013 data from the Centers for Disease Control and Prevention. Yet, rural newspapers usually shy away from stories about suicide. Bradley Martin of the Hickman County Times in Centerville, Tenn., 50 miles west of Nashville, takes a different approach, tackling the subject head on in an attempt to raise awareness about suicide. In an article for the Daily Yonder, Martin describes how writing about a difficult issue has helped changed the community.

"I woke up to the depth of the problem in my community in 2003 when, during the first four months of that year, six persons had taken their lives, all by firearms," Martin writes. "It’s hard for a reporter who tracks police activity to ignore that, even if you don’t report it. By the end of the year, Hickman County, Tennessee (population 23,000 at the time) had experienced 13 suicides, all of them violent. That’s a rate of 56 per 100,000."

Working with the state-funded Tennessee Suicide Prevention Network, Martin helped form the Hickman County Suicide Prevention Task Force in 2003 to organize training sessions, he writes. "In the years since, the group has become a fixture at community events, supplying prevention information; an annual remembrance is focused on victims and families, highlighted by a balloon release. The local task force chair has been the statewide chair, too; and a second group has been created to bring together surviving family members who are struggling with their losses. All of it has added awareness."

"In Tennessee, it has been helpful that teachers must go through suicide prevention training each year, since young people are of major concern for suicide," Martin writes. "A year ago, because of the task force’s work here, the statewide group was permitted to bring grief counselors to one of our high schools when a 15-year-old girl took her life. . . . No link to the local task force can be directly made, but I know that the number of suicides here have decreased on an annual basis since that awful 2003. The worst since then has been eight, in 2010; in 2013, there were 4, which was a rate of 16.5 per 100,000. That’s almost even with the Tennessee rate, which was 14.4 that year. Both are better than the U.S. rate—but there’s still more suicides that murders here." (Yonder map) 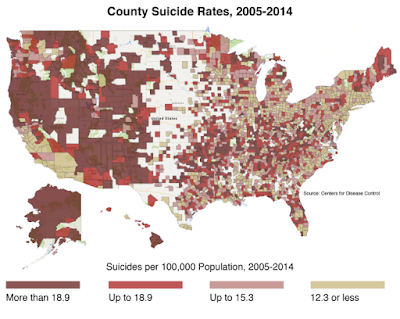 Rural newspapers' policies for reporting suicides vary widely but lean toward privacy. In a recent discussion on the emailed Hotline of the International Society of Weekly Newspaper Editors, Paul Keane, editor and publisher of the Wayne County News in Waynesboro, Miss., gave a typical policy: "The general, basic rule we've followed here is that is the death/suicide takes place in the public, then we cover the story and try to handle it as gently as possible out of respect to the family."

Publisher Robert M. Williams Jr. of The Blackshear (Ga.) Times posted his detailed policy: "If a person takes their own life in a private manner, in a private place such as their home, property, etc., and the police do not become a part of the situation until after the person is found by someone with access to that private place, we carry no news story. If the person chooses to take their life in a place that would not be considered private, such as on neighboring property or any place where someone who would not have access to their home may find them, we print a discreet news story. If the police become involved, such as in a hunt, then it is a news story from beginning to end. We have had people break into their workplace after hours to commit suicide."

Newspaper consultant Jim Pumarlo said his small daily in Red Wing, Minn., tried to report "the causes of all deaths which are other than by natural causes. . . . But the definitions are not always so clear. Think about a bank president who has served on almost every community board imaginable, found dead in a car in a city lot. As an alternative, consider if he commits suicide in the privacy of his home. Reflect on the same circumstances, but now substitute a retail clerk as the suicide victim." Giving other cases, Pumarlo asked, "Is any one of these deaths less newsworthy? . . . It’s common practice today for communities to have formal responses to youth deaths whether the cause is an accident or a suicide. Grief counselors often come into the schools and meet with students. The kids come home, and it’s a dinner topic. Can you really ignore reporting the suicide and still promote yourself as the premier source of information?"

The rise of social media has made several papers change their policies. Allan Burke, publisher emeritus of the Emmons County Record in Linton, N.D., said that paper reports every suicide, partly because the investigation of it involves law enforcement, and because "When facts are not reported, people make up the stories. . . . In the world of social media, newspapers are left with the burden, or privilege, of reporting the facts."

Managing Editor Paul Goetz of The Mountain Mail in Salida, Colo, noted a good guide for suicide coverage, ReportingOnSuicide.org. It notes research showing that heavy or sensational coverage of the topic "can increase the likelihood of suicide in vulnerable individuals." But it also encourages the kind of reporting that Brad Martin does in the Hickman County Times, about suicide as an issue.

Martin said in the email discussion, "Yes, people will be mad at you. First time for that? In my community, I no longer get any flak for it. Actually we give more ink on an annual basis to the prevention group, which also has a 'Do you know the signs?' training component that does a major service by not only raising awareness but providing an approach to preventing it."
Written by Tim Mandell Posted at 1/19/2016 01:43:00 PM