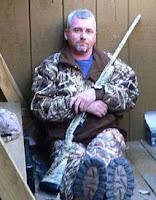 When a Kentucky man with a shotgun brought down a drone near his home last summer, it set off a dispute that "could settle an issue that experts say has never before been addressed by the courts: the conflict between a homeowner’s right to privacy and the federal government’s exclusive sovereignty over the skies," Andrew Wolfson reports for The Courier-Journal in Louisville.

Charges against "drone slayer" Willie Merideth of Hillview, above, were dismissed but the owner of the drone, John David Boggs, has filed suit for damages and what he calls “clarity to protect the right to fly responsibly without fear of being shot at.” He wants U.S. District Judge David J. Hale to resolve the “boundaries of the airspace surrounding real property, the reasonable expectation of privacy as viewed from the air, and the right to damage or destroy an aircraft in flight.”

Wolfson reports, "Merideth also says he looks forward to the court’s resolution of where private property ends and the open sky begins. Boggs’ Nashville lawyer, James Mackler, a former Army Blackhawk helicopter pilot who specializes in drone law, says much is at stake, including for companies like Amazon, which plans to deliver packages to customers via drones that would touch down on their lawns." Mackler todl Wolfson, “If every property owner has a right to take a shot at them, that pretty much ends that business model.”

States and local governments that want to regulate drones are clashing with the Federal Aviation Administration, which "says it has sole authority over the national airspace while Kentucky law gives landowners the right to use force necessary to prevent trespassing," Wolfson writes. "The Supreme Court hasn’t addressed the issue since 1946 when it ruled that a North Carolina farmer could assert property rights up to 83 feet in the air -- and win compensation for military aircraft that were flying so low they were disturbing his cows and chickens. But that was long before the advent of drones, which are now used for everything from law enforcement to land surveys, from search and rescue to wildlife tracking. Best Buy offers 50 models just for photo hobbyists, while more than 50 companies produce 155 models in the U.S., with wingspans ranging from six inches to 246 feet."

The Academy of Model Aeronautics, which was founded in 1936 and says it has 175,000 members, "says it welcomes guidance from the federal courts but that states already have enough laws on the books that make harassment and peeping a crime. The Muncie, Ind.,-based group says its policies already ban members from flying directly over unprotected people or houses or flying near an airport," and notes that a 2012 federal law "bars drones and model aircraft owners from interfering with other aircraft and says they must be operated within direct sight of the owner," Wolfson reports.
Written by Al Cross Posted at 1/17/2016 10:25:00 PM