After the Obama administration called for a national strategy to protect bees and other pollinators, which are essential to many crops, most states agreed to develop pollinator protection plans. Few have done so, according to the Pollinator Stewardship Council, which tracks the process with an interactive map. Here's a screenshot with an example of information on one state: 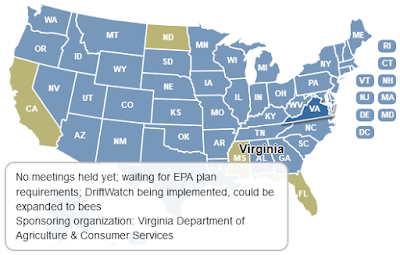 In Virginia, where almost half the state's bee colonies are estimated to have died last year, seven meetings have been scheduled, in Roanoke, Warrenton, Blackstone, Charlottesville, Henrico, Suffolk and on the Eastern Shore, reports Tonia Moxley of The Roanoke Times. The state's pollinator protection plan "will focus on how officials can help users of pesticides and beekeepers communicate to prevent problems, according to Virginia Department of Agriculture and Consumer Services." That is likely to include registration of hives, which will help inform pesticide applicators where hives are located. Pollinators also include bats, hummingbirds, butterflies and other insects.
Written by Al Cross Posted at 1/18/2016 10:54:00 AM