Highlighting exactly how rural the U.S. is, The Washington Post has created a map that shows that the 462 least densely populated counties in the U.S. consist of 42 percent of land and only one percent of the population, Christopher Ingraham reports for the Post. None of the 462 least densely populated counties has more than 7.4 people per square mile, and 65 counties have less than one person per square mile. Alaska's Yukon-Koyukuk Census Area, which is more than 145,000 square miles, is home to only 5,547 people, a population density of fewer than four people for every 100 miles.

For example, New York's Bronx and Queens, which are considerably smaller than any of the 462 counties, are home to 3.8 million people, more than the entire total in the 462 rural counties, Ingraham writes. "Geographically speaking, we are a nation of mountains, forests and farmland surrounding tiny islands of urbanity." 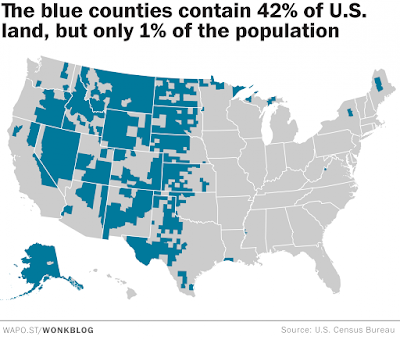