In 2000, "urged on by their presidential standard-bearer Texas Gov. George W. Bush and by nearly all of the business lobbyists who represented the core of the party’s donor class, three-quarters of House Republicans voted to extend the status of permanent normal trade relations to China," Tankersley writes. The bill, signed into law by Democratic president Bill Clinton, "held the promise of greater economic prosperity for Americans. But few could predict that it would cause a series of economic and political earthquakes that has helped put the GOP in the difficult spot it is in today: with the most anti-trade Republican candidate in modern history, Trump, moving closer to clinching the party’s nomination."

"The 2000 vote effectively unleashed a flood of outsourcing to China, which in turn exported trillions of dollars of cheap goods back to the U.S.," Tankersley writes. "Over the next 10 years, economists have concluded, the expanded trade with China cost the U.S. at least 2 million jobs. It was the strongest force in an overall manufacturing decline that cost 5 million jobs. Those workers were typically men whose education stopped after high school, a group that has seen its wages fall by 15 percent after adjusting for inflation." (Post graphic) 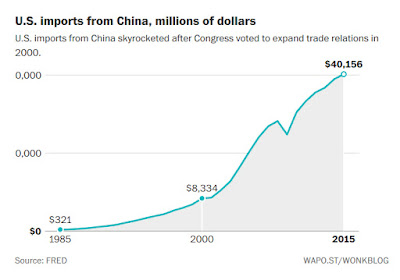 While the trade deal helped improve the Chinese economy, it came at the expense of American workers, O'Brien writes. "Ask any economist, and they'll tell you that this isn't the way things work. That people who have their jobs outsourced will, for the most part, find new ones that pay just as much if not more. And, to be fair, that was a pretty accurate description of the world for a long time—but not right now."

"Economists David Autor, David Dorn and Gordon Hanson have found that, between 1990 and 2007, the American communities most exposed to Chinese competition saw their manufacturing workers pushed into persistent unemployment, their non-manufacturing workers pushed into accepting lower wages and everyone pushed into relying on the safety net, whether that was welfare, disability or food stamps, more than before," O'Brien writes. "In all, trade with China alone was responsible for about a fifth of the manufacturing jobs we lost during this time—or 1.5 million to be exact."
Written by Tim Mandell Posted at 3/22/2016 12:44:00 PM