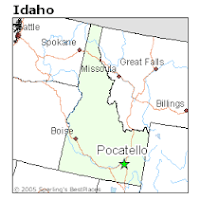 A cultural clash has been brewing in rural isolated Pocatello, Idaho, (Best Places map) between the large Middle Eastern student population at Idaho State University that brings much-needed money to the community and a growing feeling among the large Mormon local population that the foreigners have demonstrated morally poor behavior, Stephanie Saul reports for The New York Times.

ISU, which has suffered from decreased enrollment and state funding, has welcomed students from the Middle East, who pay "$20,000 per student in annual out-of-state tuition, nearly three times what state residents pay," Saul writes. "As the number of Middle Eastern students grew to nearly 1,200, almost 10 percent of the school’s enrollment, that meant an estimated $40 million for the local economy every year."

But officials were ill-prepared for conflicts between Middle Eastern students and locals, Saul writes. "Even if they were just normal, rowdy college kids, the behavior of the mostly male students stood out in this conservative, predominantly Mormon city. Free from the strict cultural mores of their home countries, some students have faced charges like drunken driving and stalking. At the same time, professors said students, many of them unfamiliar with English, were ill-prepared and frequently resorted to cheating. Students have taken umbrage to the accusations and have recounted episodes of discrimination on campus and in town. Now some students are leaving."

While Middle Eastern students helped revive the economy in Pocatello—supporting car dealerships, restaurants and local businesses—they also brought unease on campus, Saul writes. Professors were unhappy with "extra work required of them because of the poor English skills of many students who needed help after class. Some professors also believed the students did not have the proper math backgrounds for their chosen majors: A chart sent to the faculty by one dean revealed that in some classes with more than 20 Middle Eastern students, 90 percent of them had failed physics, 75 percent had failed introductory English and more than 60 percent had failed math." That led to accusations of cheating. While some Middle Eastern students were caught cheating, others say they were wrongly labeled cheaters for being of the same ethnicity. That has caused some students to tell friends to seek education in America elsewhere.

ISU lost more than $2 million per year in tuition alone from 100 students who left last summer, Saul writes. But the school is not alone. "By some estimates, the one million international students in the U.S. generate a $30.5 billion boost to the economy. The largest group comes from China, but Saudi Arabia, the fourth-largest country of origin, supplies more than 70,000 students to schools like Arizona State, Western Kentucky, Cleveland State and Southern Illinois."

"Some of these institutions are particularly concerned about the impact of a recent announcement by the King Abdullah Scholarship Program, which supports most of the students from Saudi Arabia," Saul writes. "The program is facing 'deep funding cuts,' according to Moody’s Investors Service, which said the scholarships would be limited to the top 100 American schools, an Academic Ranking of World Universities list that does not include Idaho State," which could lose another 250 Middle Eastern students in the next academic year. (Read more)
Written by Tim Mandell Posted at 3/22/2016 12:44:00 PM