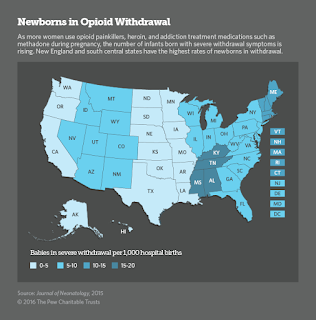 The number of babies born suffering from opioid withdrawal, or neonatal abstinence syndrome (NAS), has increased from 1.2 per every 1,000 hospital births in 2000 to 5.63 per every 1,000 hospital births in 2009, with an estimated 21,732 babies born with NAS in 2012, according to a study by the National Institute on Drug Abuse. A rise in heroin and opiate use in rural areas has helped lead to high numbers. NAS numbers are highest in Alabama, Kentucky, Mississippi and Tennessee. Health officials in Wisconsin released a report this month that found that the number of babies born in Wisconsin addicted to heroin increased 125 percent from 2009 to 2014. Opiate addiction has become an increasing problem in the state's rural areas, especially some of the smallest counties. (Stateline map)

"When a pregnant woman uses drugs or alcohol during pregnancy, some of the substances travel through the placenta to the baby," Christine Vestal reports for Stateline. "In many, but not all, cases, exposure to opioids during pregnancy can cause the fetus to develop physical drug dependence. When the umbilical cord is cut at birth, the newborn is abruptly disconnected from its supply of opioids and can suffer withdrawal symptoms. Although painful, newborn withdrawal symptoms, which include muscle cramps, tremors, diarrhea, vomiting, sleep problems and sometimes seizures, are not life threatening and have not been shown to cause health problems or developmental deficiencies later in life. The condition can be treated with small doses of morphine and subsides within a one to three weeks."

"Last year, a federal law was enacted—the Protecting Our Infants Act—authorizing the U.S. Centers for Disease Control and Prevention to work with states to collect data on the prevalence of babies born with opioids in their bloodstream," Vestal writes. It also calls on the U.S. Department of Health and Human Services to develop recommendations for the best way to prevent and treat drug use during pregnancy."

One problem is that it can actually hurt a baby for a drug addicted mother to quit using drugs while pregnant, Vestal writes. "Abruptly quitting opioids in the first and third trimesters of pregnancy can cause harm to the fetus, including miscarriage and stillbirth, and is not recommended. Even in the second trimester, specialists agree that the risk of relapse outweighs any potential benefit to the fetus of lowering the dose of addiction maintenance medications or discontinuing their use."
Written by Tim Mandell Posted at 3/25/2016 12:50:00 PM