The number of rural places that ban the sale of alcoholic beverages is declining, but the local-option elections that repeal Prohibition often don't get incisive advance coverage from local weekly newspapers, perhaps because so many readers have a faith-based opposition to alcohol and many others drink on the sly. 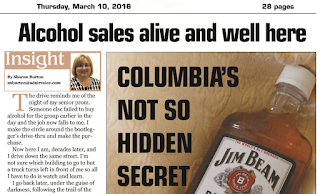 The Adair County Community Voice took a more aggressive approach as the Southern Kentucky county prepared to vote yesterday on whether to allow alcohol sales. Editor-Publisher Sharon Burton wrote a front-page essay that began with reliving her own experience of buying liquor from a bootlegger on her senior-prom night and went to the current experiences of students at the local, Methodist-sponsored college and federal survey statistics on local drinkers: 22 percent of adults in the county of 19,000.

Burton said the community has "already said yes to alcohol. But we've said yes in a way where we don't have to take responsibility. We allow alcohol to be sold in the shadows, treating it like a heroin den; people can get their fix, but we don’t have to look at it. We can pretend it isn’t there because we don’t see it when we go to the gas station or local restaurant. We don’t have to drive by a store with a beer sign in the window."

The following week, the Community Voice filled most of its front page with a set of bullet points about what would happen if voters said no to alcohol, and longer list of what would happen if they said yes. In today's paper, it reports the vote: Yes, 3,384; No, 2,755.
Written by Al Cross Posted at 3/23/2016 12:00:00 AM

Was the same story over here in Russell Co too.