For poor Americans, where you live plays a major role in how long you live, county-level data show

While many studies have shown that rich people live longer than poor people, says a study with county-level data published today in the Journal of the American Medical Association says life expectancy among poor people varies based on variety on geographic differences. "Life expectancy for individuals in the lowest income quartile [the bottom fourth] were significantly correlated with health behaviors such as smoking, but were not significantly correlated with access to medical care, physical environmental factors, income inequality, or labor market conditions," researchers stated. "Life expectancy for low-income individuals was positively correlated with the local area fraction of immigrants, fraction of college graduates and government expenditures."

The study found that "shorter life expectancies for the poor, measured at age 40, were most closely correlated with places that had lower exercise rates and higher rates of smoking and obesity," Christopher Ingraham and Emily Badger report for The Washington Post. "For men, the gap between the top and bottom 1 percent nationwide is nearly 15 years. For women, it's 10 years. And these disparities have widened since 2000. People in the top 5 percent have gained about three years of life expectancy. People at the bottom have gained almost nothing." (Post maps) 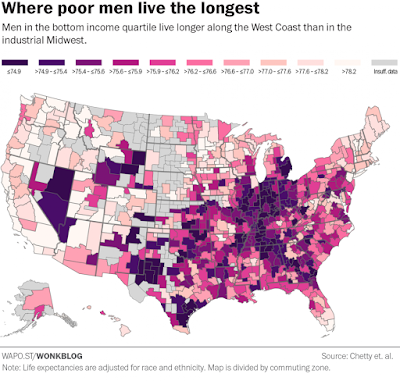 The study, "based on the tax and Social Security records of everyone in America between 1999 and 2014 with a valid Social Security number and earnings, gives the most precise look yet at a pattern that has long troubled health experts: In America, the richer you are, the longer you live. But what's especially striking is that the poor live even shorter lives in some places than others," Ingraham and Badger write. "They have longer life expectancies in affluent, cities with highly educated populations, such as San Francisco, New York and Los Angeles. Among the 100 largest commuting zones ranked by the researchers, six of the top eight for low-income life expectancies are in California, a state with a strong safety net and a history of regulating where you light your cigarette or what comes from your car's tailpipe." 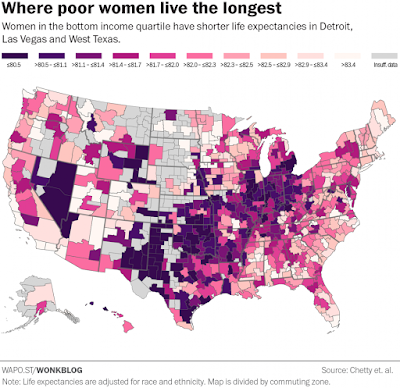 "Geography also matters much more for the poor than the rich," Ingraham and Badger write. "The health behaviors of the wealthy are similar wherever they live. For the poor, their likelihood of risky behaviors such as smoking depends a great deal on geography, on whether they live in a place where smoking is common or where, as in San Francisco, cigarettes have been shunted out of view." (Read more)
Written by Tim Mandell Posted at 4/11/2016 01:38:00 PM