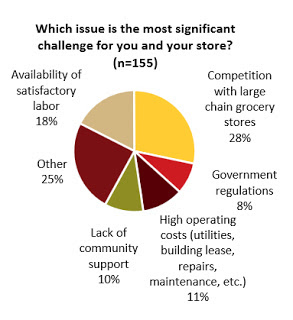 More than one-third of rural Minnesota grocery store owners don't expect to be in business in five years, according to a survey by the University of Minnesota Regional Sustainable Development Partnerships and the Minnesota Center for Survey Research. Store owners say the main problem  is competition from chain stores that offer cheaper prices.

Help could be on the way, state-government correspondent Don Davis of Forum Communications reports in his Capitol Chatter blog. State Rep. Rod Hamilton, R-Mountain Lake, is seeking a $10 million appropriation to help stop businesses from closing, although he admits it will be tough in a year when money is scarce. "While Hamilton’s bill has more debate in his and other committees, a bill similar to the one he wrote awaits a final Senate committee hearing. Another Hamilton measure, which is not moving in the Senate, would spend $600,000 to extend a $2 million appropriation granted last year to compensate farmers for providing fresh produce to food shelves."

Separate legislation would help provide food for food shelves, which often buy from small stores, Davis writes. Also, "Gov. Mark Dayton and other Democrats have been especially strong in calling for additional money to help Minnesota’s minority and other poor communities. The governor frequently has said money should be used statewide, including rural communities." (Read more)
Written by Tim Mandell Posted at 4/15/2016 10:54:00 AM