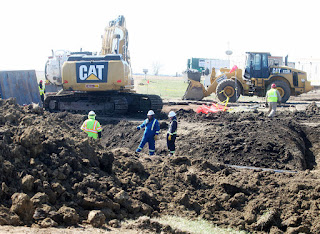 A TransCanada Keystone Pipeline spill that leaked 16,000 gallons of oil near Freeman, S.D., April 2, caused the pipeline to be shut down until Sunday, when it resumed operating on a lower pressure than normal, reports KELO-TV in Sioux Falls. The local paper, the weekly Freeman Courier, has been on the scene since the spill, keeping local residents well informed. (Courier photo by Jeremy Waltner: Workers at the spill eight miles south of Freeman)

"Winds blew strong across the South Dakota prairie on Friday as work continued just south of a busy Highway 18, as cars and trucks screamed by," the Courier reports. "It's a busy west-east state highway anyway, but the widespread attention of the oil spill likely drew additional traffic. A few cars slowed as they passed by. A man sat in a pickup on the north perimeter of the scene, next to a road closed sign, on security detail. A mile south was another man in another pickup checking people in. This is the outlet for the massive side dump trucks hauling dirt."

"Inside the mile-long blocked-off section of gravel road, which is located about five miles from TransCanada’s pump station near Freeman, workers work," reports the Courier. "Some of them are locally-hired contractors, others are with TransCanada, says David Dodson, the public information officer with TransCanada stationed at incident command on site. He describes the work as 'digging and looking.' Dodson said about 100 men and women are working the scene around the clock on a rotation basis."
Written by Tim Mandell Posted at 4/11/2016 01:35:00 PM