Scotts subsidiary Ortho announces it will phase out type of pesticide harmful to bees, other pollinators 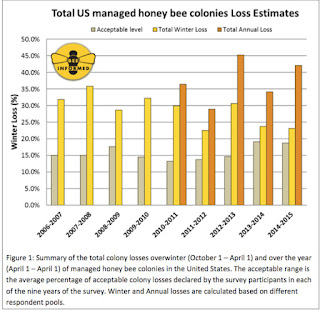 Insect control product maker Ortho announced on Tuesday "it would begin 'to transition away' from using chemicals that are harmful to honeybees and other pollinators, responding to growing pressure from environmental advocates," Roger Yu reports for USA Today. "The Marysville, Ohio-based company, which is a subsidiary of ScottsMiracle-Gro, will discontinue neonicotinoid-based pesticides for outdoor use. The move follows Lowe's and Home Depot's announcements last year that they will stop selling neonicotinoid-based products in their garden care sections." (Bee Informed graphic)

"Ortho also plans to work with the Pollinator Stewardship Council, an advocacy group that supports beekeepers, to start a customer education program and lobby for the use of label language that clarifies the purchase of non-neonic pesticides," Yu writes. Last year, honey production fell 12 percent among producers with five or more colonies, according to a U.S. Department of Agriculture survey. Declining bee populations have been partially blamed on pesticides. Bees are responsible for more than $15 billion in increased U.S. crop value each year. (Read more)
Written by Tim Mandell Posted at 4/13/2016 02:10:00 PM