The U.S. Supreme Court this morning struck down a Texas abortion law as unconstitutionally restrictive, ensuring that women in rural Texas would continue to have reasonable access to the procedure. The court's 5-3 majority noted that the Fifth Circuit Court of Appeals found that the “two requirements erect a particularly high barrier for poor, rural, or disadvantaged women.”

"The requirements that doctors who perform abortions maintain admitting privileges at nearby hospitals and all abortions be performed in hospital-like surgical centers, have caused more than half of the state’s abortion clinics to close," Katie Leslie reports for the Dallas Morning News. "Up to nine more clinics would have closed if the justices had voted to uphold the law in full. The stricter building requirements were on hold while the Supreme Court reviewed the case."

Other states have passed similar laws, but the decision's impact "may not be immediately felt outside of Texas," Leslie writes. Those laws "probably won’t change unless they are challenged in court or repealed by state lawmakers."

"Since the law at the center of the Supreme Court case -- House Bill 2 -- was enacted in July 2013, the number of abortion clinics in Texas has dropped from 40 to 18," Brittney Martin and Andrew Chavez reported for the News. "100 counties are more than 100 miles away from the nearest Texas abortion facility, and 21 counties are more than 250 miles away," as shown by these DMN maps: 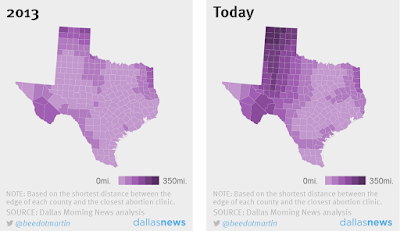 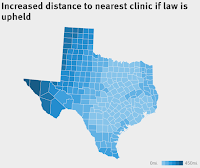 "An analysis by the News shows that more clinic closures, specifically the closure of clinics in El Paso and McAllen, would disproportionately affect women in counties with largely non-white populations and higher levels of poverty," Martin and Chavez write. At right is a map representing the newspaper's analysis. For an interactive version of all these maps, with county-by-county information, click here. For larger versions of any of these maps, click on them. The New York Times produced several maps showing past, present and potential distance to abortion clinics; here's the basic national map: 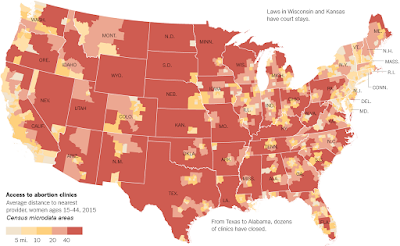