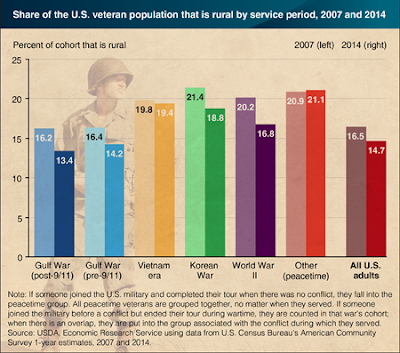 Members of the armed services come disproportionately from rural America, but most don't return when they leave. The count of rural veterans continues its rapid decline, despite an overall increase in the number of veterans since 9/11, says a report by the Economic Research Service of the U.S. Department of Agriculture. (USDA graphic)

In 2014, 3.4 million veterans lived in rural areas, down from 4.5 million in 2007, "despite an influx of more than 100,000 post-9/11 veterans over the same period." The biggest decline is among World War II veterans, whose numbers dropped by 400,000 in rural areas from 2007-2014. Numbers are expected to continue to decline, "as the newest veteran cohorts have overwhelmingly returned to urban areas and the current rural veteran population ages."