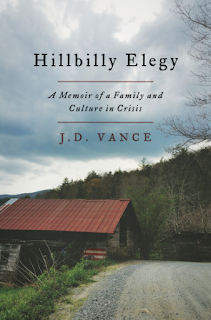 J.D. Vance is a Yale Law School graduate who was raised mainly by his grandparents because one of his parents was an addict. His family was part of the great migration north from Central Appalachia -- Jackson and Breathitt County, Kentucky, where life expectancy is only 70 years, to Middletown, Ohio, where there are so many Kentucky transplants they call it "Middletucky." But the culture follows, and economic problems do, too. "People have struggled to get out of Jackson for decades," Vance writes, "Now they struggle to get out of Middletown."

Vance's new HarperCollins book, Hillbilly Elegy: A Memoir of a Family and Culture in Crisis, is about his extended family and its times. "Nearly every person you will read about is deeply flawed," Vance writes in his introduction. "But I love these people, even those to whom I avoid speaking for my own sanity. . . . There are no villains in this story. There's just a ragtag band of hillbillies trying to find their way -- both for their sake and, by the grace of God, for mine."

Vance, 31, says he wrote the book because, among other things, "I want people to know how it feels to nearly give up on yourself and why you might do it. I want people to understand what happens in the lives of the poor and the psychological impact that spiritual and material poverty has on their children."

Sales of Vance's book are likely to surge because it is the takeoff point for the latest political column by David Brooks of The New York Times. Brooks says the book is "essential reading for this moment in history," a time when the lesser-educated working class is losing "the social institutions and cultural values that made it possible to have self-respect amid hardship."

Brooks writes, "This honor code has been decimated lately. Conservatives argue that it has been decimated by cosmopolitan cultural elites who look down on rural rubes. There’s some truth to this, as the reactions of smug elites to the Brexit vote demonstrate. But the honor code has also been decimated by the culture of the modern meritocracy, which awards status to the individual who works with his mind, and devalues the class of people who work with their hands. Most of all, it has been undermined by rampant consumerism, by celebrity culture, by reality-TV fantasies that tell people success comes in a quick flash of publicity, not through steady work."
Written by Al Cross Posted at 6/29/2016 11:13:00 AM

I must recommend reading the book Hillbilly Elegy: A Memoir of a Family and Culture in Crisis.
I finished reading it today, and I think its a very good book.

I ordered mine off Amazon and I got it in just 2 days.
Here is a link for the book on Amazon:
Hillbilly Elegy: A Memoir of a Family and Culture in Crisis