Many states are creating new medical opportunities close to home in an effort to train and retain homegrown doctors in rural areas, Michael Ollove reports for Stateline. Eighty-four percent of U.S. medical schools "have, or plan to establish, programs to recruit diverse students interested in working with underserved populations," Ellen Wexler reported in May for Inside Higher Ed. That includes a new medical school opening at Arkansas State University this fall that has an initial enrollment of 115.

Overall, medical-school enrollment in the U.S. has risen 25 percent—by nearly 87,000—since 2002, according to a report from the Association of American Medical Colleges (AAMC). The number of students in osteopathic medical school has more than doubled, to nearly 26,000, during that time. Doctor shortages are still a concern, especially in the rural South. By 2025, the U.S. will have a shortage of 94,700 physicians, reports AAMC. (AAMC map: Active physicians in 2014 per 100,000 population) 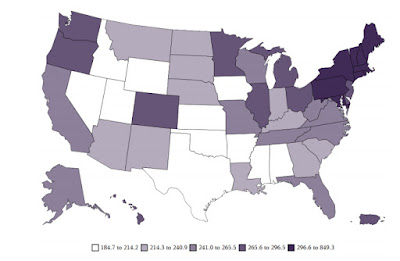 Some states, such as Georgia and Texas, are increasing their number of medical residencies, Ollove writes. Twenty-seven states "offer grants and stipends to medical students and residents willing to do clinical rotations in parts of their states where doctors are needed most. Some states have created branches of their medical schools in underserved areas to attract doctors and residents to the regions. The University of Kentucky College of Medicine, for instance, is creating satellite campuses in the southern and eastern part of the state."

"Arkansas, Kansas and Missouri passed measures in the last two years that enable medical school graduates to treat patients before completing their residencies," Ollove writes. "Almost all states have embraced telemedicine, in which doctors use audiovisual technology to treat patients in remote locations, notably rural areas, from afar. And several states, such as Arizona, Maine, Maryland, Nevada, Vermont and Washington, have liberalized laws to enable nurse practitioners and physician assistants to perform some treatment normally done by doctors." (Read more)
Written by Tim Mandell Posted at 6/15/2016 11:13:00 AM