A handful of agriculture corporations are monopolizing the seed and chemical business, leading to too little market competition, Missouri Farmers Union President Richard Oswald writes for the Daily Yonder. "For as long as agriculture has relied on chemical pesticides and fertilizers, we’ve been equally dependent on chemical companies to supply those needs. But competition among a number of chemical companies traditionally has been reduced or eliminated over the years as one consolidated company hooks up with another."

"Then, thanks to laws that allowed them to patent genes, Monsanto got into one of the most disjointed, independent agricultural industries: seeds. There were once hundreds of small seed companies across the Midwest that sprang up to serve the needs of farmers for public varieties of everything from corn, wheat, and soybeans, to alfalfa," Oswald writes. "These small companies were easy picking for a patent-wielding pro like Monsanto. Monsanto is now the largest seed-selling corporation in the world." 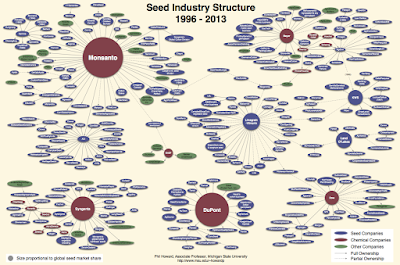 Bayer is looking to acquire Monsanto, Chem China is acquiring Sygenta and DuPont and Dow are merging, meaning that three companies will own half of all global seed sales.

"Bayer wants to buy Monsanto for all the reasons Monsanto used when it bought out its own competition—because they say the world needs a more productive agriculture to meet the needs of a growing population," Oswald writes. "In truth, the real reason is most likely that corporations see a clear path to higher profits through acquisition."

"Those big companies at the head of the problem won’t reduce prices because they don’t have to," Oswald writes. "They control access and the markets where those inputs are sold. Even though seeds are really just grain, and pesticides and fertilizer are many times just petroleum-related products. Lower grain and oil prices don’t translate into savings for farmers. The only way these companies will reduce their prices is if farmers stop buying from them. And the only way that would happen is if farmers had the choice to purchase from a competitor. Or because the farmers went broke." (Read more)
Written by Tim Mandell Posted at 6/13/2016 10:46:00 AM