220 counties judged at high risk for HIV or hep-C outbreaks; 56% in Appalachian Ky., Tenn. and W.Va.

The Centers for Disease Control and Prevention has identified 220 counties—most of them rural—that are most vulnerable to an HIV or hepatitis C outbreak similar to last year's epidemic in Austin, Ind., Arian Campos-Flores and Betsy McKay report for The Wall Street Journal. Of the 220 counties, 56 percent are in Kentucky, Tennessee and West Virginia "in the Appalachian region hardest-hit by the opioid crisis."(WSJ map; click on it for a larger version) 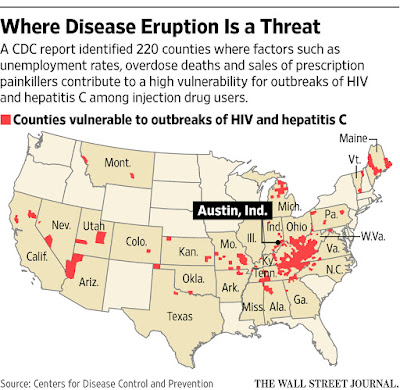 At least 194 people have been infected with HIV or hepatitis C in Scott County, Indiana, which includes Austin. "The lifetime cost of treating the HIV patients, as well as those with hepatitis C, could approach $100 million, the CDC estimates," Campos-Flores and McKay write. Most cases have been linked to intravenous drug use.

John Brooks, senior medical adviser for the CDC’s Division of HIV/AIDS Prevention and lead author of the analysis, told the Journal that injection drug use accounted for 6 percent of new HIV cases in 2014, much less than in the mid-1990s, when the share was above 30 percent. Indiana Health Commissioner Jerome Adams said the state's HIV outbreak is largely contained, "with only a handful of new cases in the past six months," Campos-Flores and McKay write. "Among those with HIV in the area, 91 percent are engaged in care. Of those, 73 percent have received prescriptions for antiretroviral drugs and 66 percent are virally suppressed, meaning their HIV load has decreased to an undetectable level. William Cooke, Austin’s sole full-time doctor, treats about 110 HIV-positive patients, and his office is connected to a new clinic run by the AIDS Healthcare Foundation that dispenses antiretroviral drugs." (Read more)
Written by Tim Mandell Posted at 6/16/2016 10:40:00 AM