Oklahoma regulators on Tuesday released "guidelines to deal with the risks of earthquakes induced from hydraulic fracturing operations in oil and gas development, an expansion of their previous responses to earthquakes linked to wastewater disposal wells" for fracking fluids, Paul Monies reports for The Oklahoman. Oklahoma had more earthquakes in 2015—941 of magnitude 3.0 or higher—than the combined total of every state except Alaska. Prior to the oil and gas boom that began in 2009, the state averaged only two earthquakes of magnitude 3.0 or higher per year. (Natural Gas Intelligence graphic) 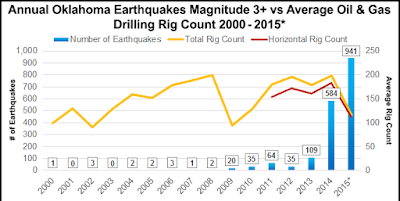 The guidelines "call for companies to shut down for at least six hours if a quake of magnitude 3 or greater is centered within 1.25 miles of a fracking operation," Mike Soraghan reports for Energywire. "During that time company officials and regulators would confer about how to change the operation. If there were to be a quake of magnitude 3.5, the fracking operation would shut down until company officials and regulators confer about whether the operation can continue."

"For quakes between magnitudes 2.5 and 3, the Oklahoma Corporation Commission is to contact nearby operators who are expected to implement their internal plans for earthquake mitigation," Soraghan writes. While the guidelines are voluntary, "OCC has the power to shut down an operation to address earthquake problems."

Many in the oil and gas industry praised the guidelines, Soraghan writes. Until recently many in the oil and gas industry, along with Republican Gov. Mary Fallin, refused to acknowledge a link between fracking and earthquakes. That changed last year when the Oklahoma Geological Survey, which originally denied any link between seismic activities and fracking operations, said "that most of the quakes are 'very likely' triggered by oil and gas activities." In March OGS for the first time released maps of earthquakes attributable to human activity.
Written by Tim Mandell Posted at 12/21/2016 12:11:00 PM