From 2007 to 2012, drug wholesalers shipped 780 million hydrocodone and oxycodone pills into West Virginia, where 1,728 residents fatally overdosed on those two painkillers, Eric Eyre reports for the Charleston Gazette-Mail. The story is part of a series on the state's painkiller epidemic that uses county-level data from the U.S. Drug Enforcement Agency. A January report by the Centers for Disease Control and Prevention found that West Virginia has the nation's highest rate of opioid deaths, at 35.5 per every 100,000 people. (Gazette-Mail graphic: Average hydrocodone and oxycodone doses per person, by county, from 2007-2012) 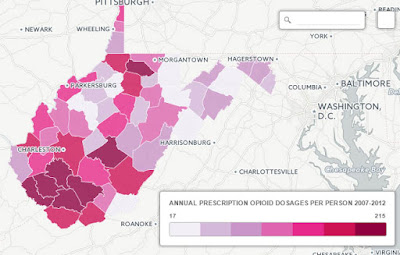 One of the problems prior to June 2012 was that West Virginia failed to enforce a state regulation that "directs wholesale distributors to set up systems to identify 'suspicious' orders for highly addictive narcotics," Eyre reports in a separate story. "It requires the wholesalers to report those questionable orders to the pharmacy board. And the regulation spells out what orders should be flagged: those 'of unusual size, orders deviating substantially from a normal pattern, and orders of unusual frequency'.” (Gazette-Mail graphic: Opioid doses per 10,000 people from 2007-2012) 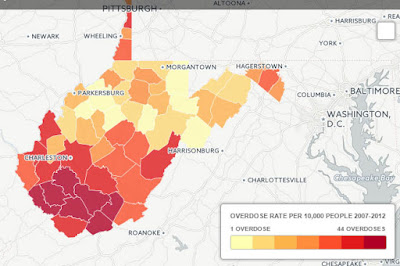 From 2001 to June 2012 the pharmacy board received only two reports of "suspicious" orders, Eyre writes. Since there have been more than 7,200. But it hasn't stopped the flow of drugs, mainly because the "rule about suspicious orders doesn't dictate what the pharmacy board is supposed to do with the reports. So the board shelved them—every one. The pharmacy board didn't investigate. It never contacted the wholesalers or pharmacies. It didn't pass the reports along to law enforcement authorities."

Instead of "suspicious" sales going down, they actually went up, Eyre reports. For example, in Mingo County on the southwestern border of the state, Tug Valley Pharmacy's "sales orders for the painkiller hydrocodone jumped from 820,000 pills in 2007 to more than 2.4 million in 2008 and more than 3 million in 2009, DEA records show. But the increases didn't prompt wholesalers to send a single suspicious order report about Tug Valley to the pharmacy board those years."

The pharmacy board, which for the first time Monday publicly discussed the "suspicious" sales reporting requirement, last week voted unanimously "to send letters to drug wholesalers, asking them to report suspicious orders," Eyre writes. There's no record that the board ever previously notified distributors of the suspicious order rule.
Written by Tim Mandell Posted at 12/21/2016 12:26:00 PM