Robert E. Murray, CEO and owner of Murray Energy Corp., the largest independent coal producer in the U.S., said he told President-elect Donald Trump to scale back his promises to revive the coal industry, Matt Egan reports for CNN Money. Murray told CNN, "I've suggested to Mr. Trump that he temper his expectations." Murray said coal "can't be brought back to where it was before the election of Barack Obama."

Trump, who promised to revive the coal industry, won big in coal counties, especially in Appalachia, telling miners in May, "Get ready because you're going to be working your asses off!" Egan writes. "Murray, a fierce opponent of Obama, believes Trump has the 'courage and commitment to stop the destruction of the coal industry.'" However he added, "that will be about all he can initially do."

Murray said he "is confident that Trump's promises to rip up Obama-era EPA regulations will prevent coal's market share from crumbling even further," Egan writes. Murray told CNN, "If he just stops it where it is, that will be a wonderful thing." (CNN graphic) 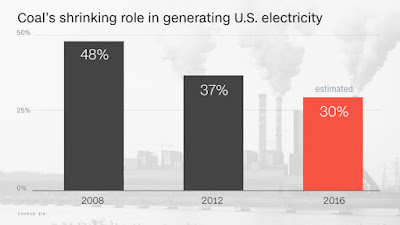