Chronic absenteeism has become a national concern in many schools, especially in rural areas, where rates are often higher than amogn urban students. A report by the U.S. Department of Education found that one in seven students were chronically absent—missing 15 or more days—during the 2013-14 school year. In Kansas, nine of the 10 schools with the highest rates of chronic absenteeism were in rural areas, Celia Llopis-Jepsen reports for The Topeka Capital-Journal.

The research "indicates chronic absence is highly concentrated in certain suburbs and cities, including places struggling with poverty and racial segregation," Llopis-Jepsen writes. "Yet areas with the highest rates of chronic absence are farther removed from the cities, in the countryside and in towns. Researchers say chronic absence isn’t the same as truancy, which receives more attention but usually focuses on unexcused absences."

Researchers suggest several reasons students miss school, Llopis-Jepsen writes: "They are ill, need to care for younger siblings during the day, or lack stable housing and move frequently, which leads to days lost during moving and re-enrollment. Some avoid school because they fear bullying or other negative situations there. Some don’t go because they or their families have other activities they would like to do, or they don’t see it as important."(Nationwide absenteeism: AP map) 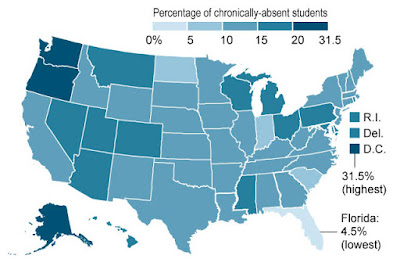 I would say that bullying, and an unfriendly atmosphere in schools, plays a large role in this.

Not only do they get bullied by fellow students but also from school staff. Some statistics have shown that harassment of students by staff (mainly teachers) has increased. Some of this harassment is even done under the "cover" of school lessons. Lessons that single out students of certain backgrounds under the lie of "teaching students about society". Even worse, these lessons have been pushed as acceptable under Common Core.