Democrats target several districts to win House in 2018; several are rural and labeled 'Left Behind'

For Democrats to win the House majority in the 2018 midterm elections, they "will need to make big gains with suburban voters, defend incumbents in rural districts where President Trump remains popular, topple a handful of Republicans in the Sun Belt and probably win a handful of seats that still aren’t on anyone’s radar," writes analyst James Hohmann of The Washington Post.

Democrats need a net gain of 24 seats to control the House. But while 23 Republican-held districts went for Hillary Clinton, those members are not necessarily vulnerable, since many are popular and have distinguished themselves from Trump's message, Hohmann says. Another complicating factor for Democrats: They must defend seats in 12 districts that went for Trump in 2016.

The analysis features an in-depth look at 65 districts where a majority might be won. The "Majority Maker" district analysis, created by the Third Way think tank using 48 census data points, divides swing districts into four categories: "Diverse/Fast-Growing Regions, Thriving Suburban Communities, Left Behind Areas, and Non-Conformist Districts." The districts are demographically diverse; some are suburban and mostly white, some are rural and heavily Latino. There are also wide differences in income, education level and employment. Many of the districts are mainly rural or have significant rural populations, and are mostly categorized as "Left Behind Areas." 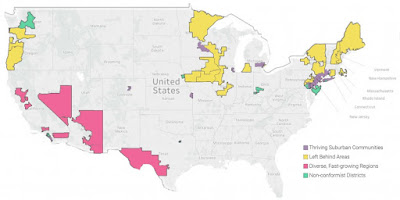 "The most important takeaway is that there is no one kind of voter or district that can deliver the House for Democrats in 2018,” said Lanae Erickson Hatalsky, the vice president for social policy and politics at Third Way, who co-authored the report with Ryan Pougiales. "There are a lot of different kinds of candidates and policies we’re going to have to welcome into the coalition to win. There’s no single kind of candidate that would resonate in all these places. The idea of purification – that we just need one kind of person who is going to bring us the majority – is not borne out by how different these places look."