Gun owners have different experiences and opinions about gun laws, depending on whether they live in urban, suburban or rural areas, the Pew Research Center has found in its polling. 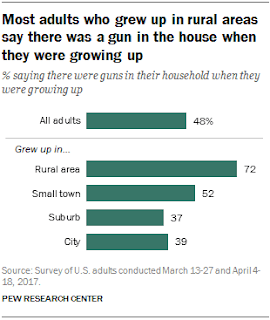 Those numbers help explain how firearms are a part of rural culture, which associates the right to own guns with a personal sense of freedom. In rural areas, 82 percent of gun owners "say the right to own guns is essential to their personal sense of freedom, compared with 59 percent of gun owners in urban areas,' Igielnik reports.

"One notable similarity between rural and urban gun owners is how they store their guns. Similar shares of gun owners in rural areas (56 percent) and urban communities (51 percent) say there is a gun that is both loaded and easily accessible to them all or most of the time when they are home."
Written by Al Cross Posted at 7/10/2017 12:08:00 PM