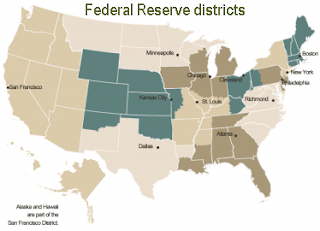 The Federal Reserve Board's latest "Beige Book" update about the U.S. economy includes several observations about agriculture in several banking regions. Here's a sample, thanks to the Farmdoc Project at the University of Illinois:

Atlanta: “Heavy rainfall due to Tropical Storm Cindy exacerbated areas’ crop moisture conditions in much of the District that were already categorized as abnormally moist to excessively wet, and there were early indications of some crop damage. . . . On a year-over-year basis, prices paid to farmers in April were up for cotton, soybeans, and broilers but remained down for corn, rice, beef, and eggs.”

Chicago: “The agricultural sector continued to operate under stress in late May and June, with reports of some crop and dairy operations exiting or filing for bankruptcy. . . . Milk prices were lower, which contributed to mounting losses for many dairy operations.”