Scopes trial town has long had statue of Bryan, the prosecutor; it's getting one of defender Darrow 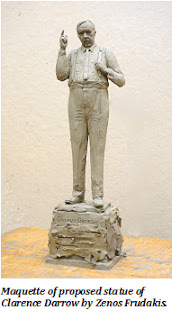 In the small Tennessee town where the "Monkey Trial" of John Scopes brought Charles Darwin's theory of evolution to the forefront of national debate in 1925, a group of atheists and agnostics will unveil a monument to honor the defense attorney in the case, reports Michael Miller of NPR.

In the trial, three-time Democratic presidential nominee and former secretary of state William Jennings Bryan was the special prosecutor of Scopes for teaching evolution in a Dayton, Tenn., high school, saying it violated a state law that made teaching human evolution illegal in public schools. Clarence Darrow, a leading civil libertarian, defended Scopes. Bryan was an influential "Christian crusader," while Darrow was a famous proponent of science and secularism, Miller notes. Scopes was found guilty and fined $100 but the verdict was voided on a technicality.

The trial put Dayton, which then had a population of 2,000 or less, on the map. Now numbering about 7,200, it has an annual Scopes Trial Festival, which starts Friday, and businesses with sly nods for names such as the Monkey Town Brewing Co. (serving Evolution IPA on tap). A bronze statue of Bryan has long stood in front of the Rhea County Courthouse, funded by Bryan College, a local evangelical institution. The statue of Darrow, which cost about $150,000 and was created by Philadelphia sculptor Zenos Frudakis, was funded mostly by the Freedom From Religion Foundation.

"It'll get people thinking and talking," Frudakis told Miller. "And it's just more historically balanced and accurate that way to have him there."

Some locals are unhappy about the statue, as the Dayton Herald-News reported, but others have no problem with it, Miller reports. Christian writer Rachel Held Evans, who wrote the memoir Evolving in Monkey Town, told him, "I'm a Christian who believes in evolution, and those two things can exist together."