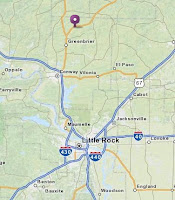 The earthquakes in Guy, Ark., population 563, have become so common that only about a dozen people turned out to a recent meeting on the issue, Campbell Robertson of The New York Times reports. "I think people are getting comfortable,” said Dirk DeTurck, who organized the meeting and sent out 600 fliers and made around 100 phone calls in hopes of attracting a larger crowd. "I mean, they have in California. They’ve become real comfortable with the shaking." (Map by Mapquest)
"Since the early fall, there have been thousands, none of them very large — a fraction have been felt, and the only documented damage is a cracked window in the snack bar at Woolly Hollow State Park," Robertson writes. "But in their sheer numbers, they have been relentless, creating a phenomenon that has come to be called the Guy earthquake swarm." Some locals say they have felt dozens of quakes, while others report just hearing them. "They do, however, have similar suspicions about the cause," Robertson writes, noting "Several years ago, the gas companies arrived, part of a sort of rush in Arkansas to drill for gas in a geological formation called the Fayetteville shale."
"They took advantage of people’s ignorance," said Greg Hooten, the superintendent of the local water utility, who now worries about the effect of the drilling on the groundwater. However, the current Guy earthquake storm isn't the first in the area. "Such swarms have happened around here twice in the past three decades, long before the gas companies came," Robertson writes. Despite the previous quakes "researchers with the Arkansas Geological Survey say that while there is no discernible link between earthquakes and gas production, there is 'strong temporal and spatial' evidence for a relationship between these quakes and the injection wells," Robertson reports. (Read more)
Written by Jon Hale Posted at 2/07/2011 01:39:00 PM