How unequal is household income in your county?

Household incomes have a wider disparity in the South and are lower than the national average in the Midwest, according to a new Census Bureau report. It is based on the Gini index, a standard measure of income inequality devised by Italian statistician Corrado Gini 100 years ago. (Click on map for larger version) 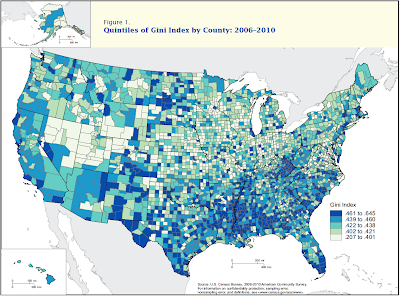 The index ranges from 1 to zero, with 1 indicating absolute inequality, where only one household in a county has any income, and zero indicating absolute equality, where all households have the same income. Almost a third of counties in the South had indexes in the top one-fifth, or quintile. About the same share of Midwest counties ranked in the bottom one-fifth. More populous counties tended to be more unequal, but a glance at the map shows that some rural areas such as Eastern Kentucky, the Mississippi Delta and the Black Belt also have high inequality. To download a PDF of the report, with a full-page map, click here.
Written by Al Cross Posted at 3/11/2012 11:22:00 PM