Why hay spontaneously combusts (It's moisture!) and how to prevent the tragedy of a barn fire 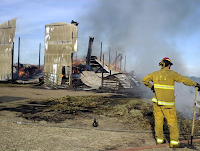 The good folks behind the Horse & Man blog are spreading the word about spontaneous hay combustion, which is very real and has been known to burn down barns and kill the animals sheltered within. The key to the fire hazard is, surprisingly, moisture. According to Lester Vough, a forage crop extension specialist at the University of Maryland, hay that is "too wet from rain or dew or that was not allowed to dry sufficiently in the field will go through a curing process (sometimes referred to as a sweat) in storage. During the curing process, heat is produced. This heat buildup is caused from live plant tissue respiration coupled with bacteria and mold activity." (Horse & Man photo)

Vough, who reports a more complete description of bacterial interaction and temperature ranges to look out for here, suggests that most problems with spontaneous combustion begin occurring within two weeks after hay has been stored, and combustion is possible for as long as two months after hay has been put up. Temperatures to watch for -- with a proper hay thermometer, experts note -- begin at about 150 degrees. Those temps should be taken in a new batch of hay, especially if has rained recently and the hay is newly baled. When stacking hay in the bay, also allow for good air flow. The same advice applies to the barn in general: Allow good air flow through the loft when possible, so no moisture can grow into a fire. (Read more)
Written by Amy Wilson Posted at 7/13/2012 01:29:00 PM

very real issue - I had a horse at a barn that went up in flames because of this - very real to many in the horse industry.