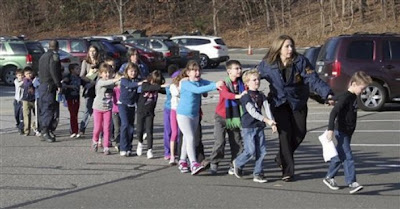 Today's horrific school shooting that left 26 victims dead was not in a rural place, strictly speaking, because it happened in a town of 27,000 people in the New York metropolitan area. But Newtown, Conn., is an exurb, not a suburb, with plenty of rural areas in a township of almost 60 square miles, one of the state's largest.

The Newtown Bee has been busy all day. "Newtown was stunned with disbelief and then shattered with grief Friday as few tragic details of a mass shooting at Sandy Hook Elementary School filtered out through authorities," the 8,000-circulation daily reported in its first full story. Here is the paper's first breaking-news report.

The paper provided photographs, like the one above by Associate Editor Shannon Hicks, to other news outlets. Kendra Bobowick reported on a memorial Mass; Andrew Gorosko covered the governor's visit. The paper's most circulated story appears to be this one by Associate Editor John Voket, headlined "Stories Of Heroism Emerging From School Shooting Tragedy." They include a custodian "who, as shots were ringing out, reportedly ran through the school halls making sure classroom doors were locked from the inside. And the school nurse who fought the urge to run toward the commotion to help, instead following the protocol and training she received never thinking she would have to use it." (Read more)

"Journalists will have to provide clear-eyed context to help the nation come to terms with the shooting" and inform debates about school safety and gun control, writes Al Tompkins of the Poynter Institute. His guide, "What journalists should know about school shootings and guns," is here.

UPDATE, Dec. 16: Poynter's Julie Moos talks about the Bee's coverage with Hicks, a volunteer firefighter whose unit was called to the scene after she arrived as a journalist. When Voket arrived, she "passed the baton" to him and donned firefighter gear, she said. But at her editor's request she went back to the office to coordinate coverage. That's community journalism. (Read more)
Written by Al Cross Posted at 12/14/2012 11:58:00 PM

"Inside scoop of gripping photo of Newtown, CT, massacre from small town newspapers"