One-parent households in the U.S. earning less than $13 per hour on a 40-hour work week could only comfortably afford a decent two-bedroom apartment in one state—Arkansas, and that would require earning $12.95 per hour, says a report by the National Low Income Housing Coalition. If a one-parent household worker in Arkansas earned minimum wage, he or she would need to work 54 hours per week to afford that same apartment.

Workers in Hawaii would need to earn $31.61, in California $26.65, in New York $25.67 and in Alaska $22.55 to afford a decent two-bedroom apartment, while those earning minimum wage in Hawaii would need to work 125 hours per week, Maryland 101 hours and New Jersey and Washington, D.C., 100 hours. (National Low Income Housing Coalition map: Wages needed to afford a two-bedroom apartment) 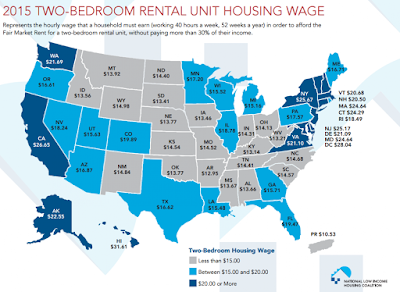 The National Low Income Housing Coalition "defines housing affordability as paying less than 30 percent of your income to housing, a common standard for the industry, and it assumes a 'fair market rent' as defined by Department of Housing and Urban Development," Ana Swanson reports for The Washington Post. 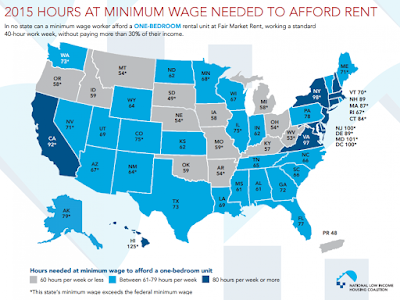