A study commissioned by Wyoming Republican Gov. Matt Mead says that conservation regulations in September that prevented the greater sage grouse from being listed as endangered "will cost the state $1 billion in total economic impact, including thousands of jobs and millions of dollars in lost revenue to state and local governments," Tiffany Stecker reports for Greenwire. The study "estimates that the state will face a loss of 5,500 jobs, $349.9 million less in labor earnings and $56 million less in state and local government revenue."

"The study sought to measure the value of sage grouse habitat to the state," Stecker writes. "These lands provide a direct annual impact of $18.4 billion—about 22 percent of Wyoming's total commodity production value of $84 billion, according to 2013 figures, said Temple Stoellinger, a law professor at the University of Wyoming."

David Willms, an adviser to Mead, said "the cost 'pales in comparison' to the economic impact if the grouse had been listed," Stecker writes. David Bush, communications director for Mead, told Stecker, "There are costs associated with the plan, but a listing for the sage grouse would have been far more devastating."

Listing the sage grouse under the Endangered Species Act could have had major implications on the state's oil and gas industry because the Obama administration tried to postpone oil and gas activity in habits. A report by WildEarth Guardians said the industry still has more than 27,000 wells in Wyoming that could greatly fragment the breeding grounds of species and bring it closer to extinction. 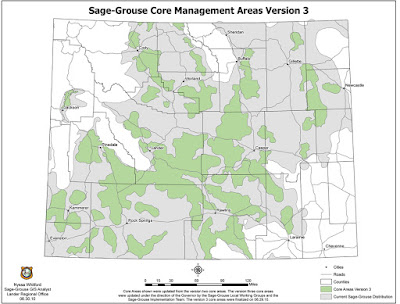