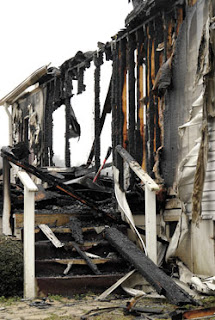 On Friday, a fire gutted a Morganton, N.C., radio station that is home to three-time Southern Gospel DJ of the Year John Whisnant Jr. Whisnant said authorities blame the fire on arson carried out possibly to hide a burglary at WCIS (760 AM), reports Mark Price of The Charlotte Observer.

"News of the fire has become the talk of the Southern gospel music industry nationwide, due to postings on popular Web sites like Singingnews.com and Sogospelnews.com," Price writes. "As a result, offers of financial assistance have come from radio stations across the United States and Canada, Whisnant says." The building was valued at about $119,000, but the station also lost 3,000 CDs and DVDs in the fire. (Read more)

The Whisnant family, which has performed Southern gospel music around the country for four decades, bought the station in 1993. The station broadcasts seven days a week, including a live morning show as well as live airings of local church services. Whisnant told Tracy Farnham of The News Herald in Morganton that the station would recover. "We will be back," he said. "Make no mistake about it. It is not a matter of if, but a matter of when." The station already has received plenty of offers of help, including from neighboring station WMIT-AM, which sent an engineer to discuss how to get the station back on the air. (Read more)