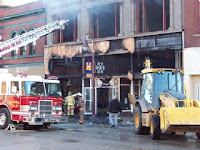 In late January, fire destroyed the offices of the Valley News Today, a 2,500-circulation daily in Shenandoah in southwest Iowa. No one was hurt, but the century-old building (at left in a VNT photo by Craig Pulley) and its contents — computers, old volumes, photo negatives — were lost. Since then, the newspaper, part of the Omaha World-Herald group, has been printing in Bellevue, Neb., and continuing to update valleynewstoday.com. The fire and the paper's response to it led Chuck Offenburger, who grew up in Shenandoah and worked for the paper in high school, to remember his time there and offer encouragement.

In a column on his Web site, Offenburger recalls a time when he watched as the press foreman modified a tractor to power the printing press and get the paper out."I got one of my best lessons in journalism: 'Whatever it takes.'" he writes. "Come what may, the press must roll. The newspaper must be produced and delivered to its readers. When you’re in the news business, you do it in good times, you do it in bad times, you do it all the time."

That's his advice for the staff of the newspaper, to pull together and move forward, because the newspaper is about people, not a building. "Knowing small towns like I do, particularly my hometown of Shenandoah, I know that while the Valley News Today crew is scrambling to get back to good newspapering, there will be thousands of people across the area cheering them on," he writes. (Read more)

The Web site of Valley News Today reflects that connection as it includes a photo gallery filled with photos submitted by readers as well as locals' remembrances of the paper's old home on Main Street. (There is also a central page for coverage of the fire.) Sports editor Kevin Slater also wrote a feature on the building's place in the history of the community.
Written by Tim Wiseman Posted at 2/05/2008 02:19:00 PM