Exit polls for the National Election Pool showed Obama and Hillary Clinton each winning the rural vote in seven of the 14 mostly larger states where polling was conducted. Not allowing for the difference in sizes of states, Clinton's average rural vote in those polls was 50 percent, Obama's 42 percent. John Edwards continued to get some votes despite leaving the race; Schultz said much of Edwards' vote seemed to be going to Obama.

But exit polls aside, the more rural a state's population, the more likely it was to go for Obama. Among the 11 most rural states where Democrats voted yesterday, Obama carried them all except Arkansas, a base state for Clinton, and two adjoining states, Oklahoma and Tennessee. Obama won every state that is more rural than the nation at large except New Mexico, which remains a tossup. "His continued victories in rural states -- in some winning two-to-one and even three-to-one -- are in part a reflection that he, his wife, his surrogates and his army of community organizers are able to, in those circumstances, establish a personal relationship and connection with more people as individuals, and not as blocs or demographic groups," Al Giordano writes in The Field. (Read more)

Obama's best rural performance in a state with a sizeable rural vote was 61 percent in Georgia; in his home state of Illinois, he got 60 percent of the rural vote in the poll. In the key state of Missouri, which Obama won narrowly, he carried cities and 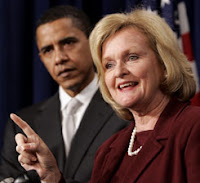 suburbs, with 50 and 52 percent, respectively; Clinton won the rural vote (26 percent of the state total) by 58 to 28. (Photo of Obama and Missouri Sen. Claire McCaskill, his key endorser there, via The Field) In Clinton's home state of New York, she got 65 percent in the "rural Upstate," which the poll said accounted for 9 percent of the Democratic vote.

In California, the night's big prize, Clinton won overall but the poll gave Obama the rural vote, 49 to 43. Among Republicans, John McCain won statewide and among rural voters, 41 to 39 over Mitt Romney. The poll classified as "rural" 8 percent of the state's Democratic vote and 11 percent of the Republican vote; the 2000 census figure was about 5.5 percent, but the exit poll uses a different classification system, based on site of precincts (except in New York). No national figures on rural vote from the polls were available on the CNN Web site early this morning.

The polls showed Mike Huckabee continued his good showing among rural Republicans, mainly in the South, carrying them in six of the 12 states where exit surveys were conducted. McCain won the rural vote in five states, but his average rural-vote percentage was 34, compared to Romney's 31 Huckabee's 28. Remember, those figures don't allow for differences in sizes of the states; Romney got 87 percent of the rural vote in Utah, home of his Church of Jesus Christ of Latter-Day Saints. For our spreadsheet of these results, click here.

Tim Murphy and Bill Bishop at the Daily Yonder are doing a county-by-county analysis, still in progress. Looking ahead, the Dallas Morning News sees trouble for Clinton in her declining support among white voters in the South yesterday. "If it keeps sliding, she could be in trouble as the Democratic presidential slugfest comes to Texas, which votes March 4," Robert T. Garrett writes from Oklahoma, noting: "To take Texas, Mr. Obama must peel away more whites and Hispanics -- especially women -- from Mrs. Clinton, experts said." (Read more)