The outlook for daily newspapers this year is not much better because advertising and circulation numbers are both falling, but a company with many rural papers is doing better than most big newspaper firms, reports Richard Perez-Pena for The New York Times.

"Advertising, the source of more than 80 percent of newspaper revenue, traditionally rose and fell with the overall economy," he writes. "But in the last 12 to 18 months, that link has been broken, and executives do not expect to be able to repair it completely anytime soon. In 2007, combined print and online ad revenue fell about 7 percent. In the last six decades, only one other year — 2001, when there was a recession — had a steeper decline, according to the Newspaper Association of America. Adjusted for inflation, 2007 ad revenue was more than 20 percent below its peak in 2000." NAA is an organization of daily papers. 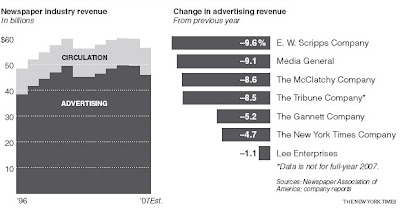 This NYT chart shows the steep decline in advertising many newspaper companies experienced on 2007. Of those featured, Lee Enterprises had the smallest loss at 1.1 percent. The company owns 55 daily newspapers — many in small, rural markets — in 23 states.

Lee owns half of The Capital Times of Madison, Wis., which announced today it will focus on the Internet and print only two days a week. Lee owns the larger, morning paper in the city, the Wisconsin State Journal. The news departments are separate; The Capital Times is more liberal and calls itself "your progressive news source."

Perez-Pena writes, "Now that some major papers have several times as many readers online as in print ... more people than ever read newspapers. . . . And papers sell more ads than ever, when online ads are included. But for every dollar advertisers pay to reach a print reader, they pay about 5 cents, on average, to reach an Internet reader." As a result, papers likely will continue cost-cutting procedures such as reduced paper size, smaller staffs and reduced delivery routes -- perhaps in rural areas. (Read more)
Written by Tim Wiseman Posted at 2/07/2008 05:57:00 PM