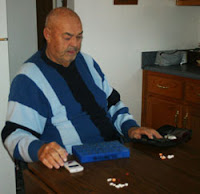 Kentucky ranks high in diabetes, and some places are estecially high, so a few weeks ago, the Institute for Rural Journalism and Community Issues made personal invitations to the newspapers serving Kentucky's 20 most diabetic counties to attend the Kentucky Diabetes Summitt. Starting this week, the Casey County News, a 6,000- circulation weekly in Southern Kentucky, began a series on diabetes and its impact in the county.

In the first installment, Brittany Emerson reports on how Bobby Foster manages his diabetes, and provides an overview of the situation in Casey County. (Emerson also took the photo of Foster.)

"The current rate of diabetes in Casey County is nearing 16 percent, one of the highest in Kentucky, according to 'The Health of Kentucky 2007,' a report published by the Kentucky Institute of Medicine," Emerson writes. "Diabetes is a chronic disease that has become a significant health problem in Kentucky, affecting 9.9 percent of the state's population, according to the Centers for Disease Control and Prevention. More than 267,000 adults in the state have been diagnosed with the disease while another 109,000 have it, but have not been diagnosed." (Read more)
Written by Tim Wiseman Posted at 2/08/2008 12:30:00 PM