Hundreds of immigrants arrested in raid on Iowa meatpacking plant; largest ever at a single site

Around 390 workers were arrested by federal agents Monday at a meat packing plant in Postville, Iowa. The AgriProcessors facility, the country's largest kosher packing plant, was temporally shut down in the raid's aftermath.

Josh Nelson wrote in the Waterloo-Cedar Falls Courier that the raid "now ranks as the largest one ever targeting a single site." The majority of those arrested came from Guatemala and were male. Charges range "from aggravated identity theft to fraudulent use of a Social Security number. The amount of people facing criminal charges could increase as the investigation continues." (Courier photo by Matthew Putney) 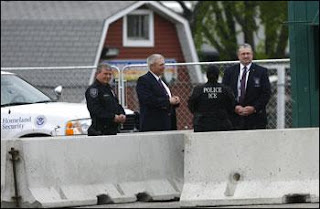 Susan Saulny reported in The New York Times, "The raid had been planned for months and was conducted in coordination with local law enforcement." Mark Gray, a professor who focuses on immigration at the University of Northern Iowa, told Saulny, "It's absolutely devastating to the local economy."

The Associated Press reported that immigration rights activists feared such a raid would come. "Several activists gathered Sunday at a Waterloo church and at the home of a local social worker to discuss what they consider to be an impending raid." The activists dicussed strategies for child care and identifying detainees in the event of a raid, and distributed flyers to migrant workers that provided contact information for local immigration attorneys and details of what they should do if confronted by police.

For the Iowa Independent, Doug Burns interviews University of Iowa professor Stephen Bloom, author of Postville, "which examines a cultural calamity in the small, predominantly Lutheran town after Lubavitcher Jews settled there to run the local slaughterhouse, resurrecting the local economy but shaking up life for the rural Iowans who already lived there." Bloom tells Burns the illegal workforce was an open secret. "The only way the meat-packing industry could operate in Iowa was this way, since fewer and fewer Iowans want to work for minimum wage, doing such back-breaking work with such few benefits (if any)," he said. "The question wasn't whether the raids were going to happen. It was when." (Read more)