Rural areas fall farther behind metros in income; most counties where income declined are rural

Personal income in rural America, as a percent of metro personal income, fell for the third straight year from 2005 to 2006, according to the federal Bureau of Economic Analysis. It reports that of the 227 counties that suffered declines in personal income, 194 were rural. An overwhelming majority of counties with declining income from 2005-2006 are classified as rural. 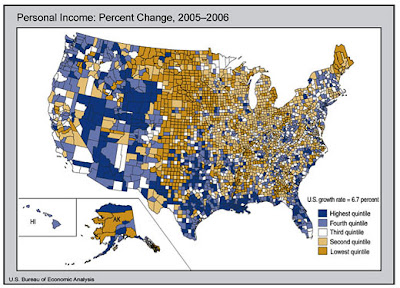 Bill Bishop and Kathleen Miller write in the Daily Yonder, "In the BEA's calculation, personal income is a comprehensive measure of the income of all persons from all sources. It includes wages, salaries, employer-provided health insurance, dividends and interest income, social security benefits, and other types of income, including farm subsidy or disaster payments. Also, in this study, 'rural' counties are defined as those that are 'non metro' counties according to the U.S. Census." That is a somewhat blunt instrument, because there are many rural areas in metro areas; in fact, about half of the rural U.S. population lives in metro areas.