As Hillary Clinton beat Barack Obama by more than 2 to 1 in West Virginia yesterday, The Washington Post published a troubling story detailing instances of prejudice and racism experienced by Obama campaign staffers in other states, Indiana in particular. Kevin Merida wrote, "For all the hope and excitement Obama's candidacy is generating, some of his field workers, phone-bank volunteers and campaign surrogates are encountering a raw racism and hostility that have gone largely unnoticed -- and unreported -- this election season."

Among voters who said candidate gender was important to them, three-fourths voted for Clinton. Those voters were 18 percent of the electorate and were evenly divided between men and women; 61 percent of the men and 85 percent of the women voted for Clinton. Race and gender aside, education continued to be a major predictor of vote. Clinton won 72 percent of white voters without a college degree. "Those voters have rarely for a Democrat in presidential elections," CNN analyst Bill Schneider pointed out. Among voters who have a bachelor's degree, Clinton won 57 percent. Among those with advanced degrees, the candidates were tied. (College graduates were 30 percent of the electorate.)

In Indiana last week, 16 percent of Democratic voters in the exit poll said the race of a candidate was important to them. Two-thirds of those were white, and Clinton won 78 percent of their vote -- or about 8 percent of the total Democratic electorate in the Hoosier State. 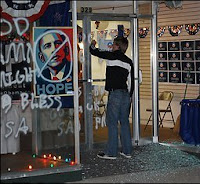 The Post story reported that Indiana vandals smashed a large plate glass window, stole an American flag, and defaced other windows with anti-Obama remarks at his campaign office in Vincennes, a town of 18,000, on the eve of the state's May 6 primary. Ray McCormick, a farmer and conservationist who put a massive "Farmers for Obama" billboard along a major highway, took photographs of the damage (including the one above) and wanted to notify the media, but campaign officials told McCormick they did not want to make a big deal of the incident. The Vincennes Sun Commercial ran only a police-blotter item. Later, the office and two others in Indiana received bomb threats, campaign sources told the Post. The paper also detailed racist remarks directed at Obama campaign workers in the Rust Belt city of Kokomo, pop. 46,000.

According to the Secret Service, Obama was placed under its protection earlier than any previous U.S. presidential candidate. The protection was granted partly because of racist postings on white supremacist Web sites. Obama has spoken little about racism during his campaign and has focused on connections among Americans rather than divisions, but the controversy over his former pastor has raised the profile of race. Racism has been called our nation's "original sin," and we do not believe such issues, especially in rural areas, should be ignored by journalists or citizens.