Biden digs Obama a hole full of coal in Ohio

Al Gore would have been president if he hadn't lost West Virginia's five electoral votes over coal issues in 2000. The same thing could happen to Barack Obama in Appalachian Ohio, given running mate Joe Biden's statements to an environmentalist on a rope line in the northwest Ohio college town of Maumee, who asked him why the Democrats were supporting clean-coal technology. 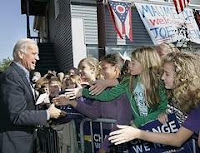 "We're not supporting clean coal," Biden told her, saying China is building "two dirty coal plants" per week. "No coal plants here in America. Build them, if they're gonna build them over there, make them clean, because they're killing you." For the video, click here. (Toledo Blade photo of Biden on the Maumee rope line)

"Obama is actually on record supporting the expansion of such technologies, but Biden's words are prompting Republicans to lick their lips about the potential resonance of the issue in key coal states such as Virginia, Ohio, Pennsylvania and Colorado," writres Jonathan Martin of Politico. "The Democrats are responding by essentially reiterating Obama's stance on the issue, implying that this was merely a matter of Biden speaking out of school." (Read more)

Newspapers in what may be the election's pivotal state are giving the story moderate coverage. The Columbus Dispatch headlines its story, "Biden's clean-coal has Democrats scrambling." Jack Torry and Johnathan Riskind write, "His words either were a verbal gaffe or reflect a split with Obama."(Read more) The headline in The Ironton Tribune reads "GOP pounces on Biden coal remarks." Benita Heath focused her piece on a media conference call placed by U.S. Sen. George Voinovich, a former governor who has bipartsan support, and other Republicans. They said Biden's statements were not a simple slip of the tongue, but represented an actual policy statement. (Read more)

The Plain Dealer in Cleveland covered the coal story and another Biden gaffe, in which he told ABC News on ABC news that the Delaware Fighting Hens were going to defeat Ohio State in college football -- a farcical statement, but perhaps not the wisest to make when preparing to campaign in Ohio. (Read more) The coal controversy followed Biden to Virginia yesterday, where he didn't mention coal as he talked about energy, Neil Simon reports for the Richmond Times-Dispatch. (Read more)
Written by Al Cross Posted at 9/24/2008 10:01:00 AM

Why is the media so up in arms about an off-the-cuff comment Biden made while they’re not reporting anything about McCain’s long-term and sustained attack on coal jobs?
John McCain has been on the attack against the coal industry for years, starting with legislation he proposed in 2003–Senate Bill 139, the Climate Stewardship Act of 2003–that would have just about wiped out the coal industry in the United States.
The U.S. Energy Information Administration released an analysis of S. 139 in May, 2004, which said the reductions in coal production under the McCain legislation was estimated to be 78 percent by 2025. Since it takes coal miners to produce coal, that would mean a drastic reduction in employment, most of which would have fallen heavily on more labor-intensive mines like we have in Appalachia.
But Sen. McCain was just getting warmed up. He teamed up with Sen. Joe Lieberman (I-Conn.) just last year and proposed climate change legislation–Senate Bill 280–that once again took a meat-axe approach to Appalachian coal. In that bill, McCain specifically targeted Appalachian coal production for cuts of 30 percent or more, while encouraging production of coal from Wyoming, according to an analysis done of the legislation by the U.S. Environmental Protection Agency.
Both Obama and McCain have proposed a variety of solutions to dealing with energy issues. They both say that they want to reduce reliance on foreign sources of energy and build an infrastructure in America that relies on a mix of sources to meet the ever-expanding energy needs of our nation, while at the same time reducing greenhouse gases.
But the devil is in the details, and once again Sen. McCain doesn’t measure up when it comes to the potential for coal–our nation’s most abundant energy resource–to continue to be the major contributor to meeting our future energy needs.
The kicker of McCain’s energy plan is to build 45 new nuclear plants across America by 2025, the first wave of 100 new nuclear plants he foresees. The negative impact on coal production and jobs from these plants will be extremely significant. And let’s face it–no matter what happens with respect to climate change over the next 50 to 100 years, the waste generated by a nuclear plant tomorrow will still be deadly to all life 10,000 years from now. Our distant descendants will likely be worrying about staying warm during the next ice age about then.
With the coming development of clean coal technologies like carbon capture and storage (CCS), America is on the brink of being able to use coal to generate energy without contributing any more greenhouse gases to the environment. Sen. McCain pays lip service to CCS, but the record shows that coal has a very limited future in John McCain’s vision of America.
Sen. Barack Obama, on the other hand, is from a coal state and clearly understands the long-term role coal can play in our nation’s energy future. He has pledged to fund development of CCS technology so that it can be deployed as soon as possible. He has said that America is the “Saudi Arabia of coal” and that we ought to be working as hard as we can to figure out how to use it for decades to come.
So the choice for coal miners, their families, their neighbors and everyone living in the coalfield communities throughout the coalfields of the U.S. Barack Obama is for the long-term future of your job and John McCain is not. Keep that in mind when you vote on Nov. 4.