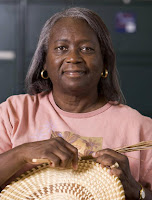 "A South Carolina basket maker and a family physician who rebuilt an Alabama health clinic after it was destroyed by Hurricane Katrina" are among 25 winners of $500,000 "genius grants" from the John D. and Catherine T. MacArthur Foundation, writes Caryn Rousseau of The Associated Press.

Recipients, who may use the money as they please, include Mary Jackson, 63, of Johns Island, S.C., above, who has been making baskets from sweetgrass since age 4 and has pieces in major museums; and Regina Benjamin, 51, of Bayou La Batre, Ala., right, founder and CEO of Bayou La Batre Rural Health Clinic in the Gulf Coast fishing community of 2,500 that was also hit by a hurricane in 1998.

"Despite scarce resources, Benjamin has painstakingly rebuilt her clinic after each disaster and set up networks to maintain contact with patients scattered across multiple evacuation sites," the foundation reports. "Benjamin is skilled, as well, in translating research on preventive health measures into accessible, community-based interventions to decrease the disease burdens of her diverse patient base." (Read more)

Rousseau writes of Jackson, "Weaving the baskets is a West African tradition handed down from the time of slavery in which artisans entwine the slender sweetgrass with such things as palmetto fronds, bulrushes and pine needles." (Read more) The foundation says she pushes the tradition "in stunning new directions." (Read more)
Written by Al Cross Posted at 9/23/2008 12:47:00 PM