Hurricane and a once-disillusioned journalist combine to create a paper in Pass Christian, Miss. 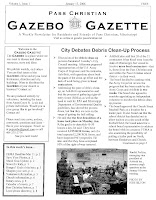 Hurricane Katrina produced a weekly newspaper for Pass Christian, Miss., which had not had one since 1990, Mississippi State University professor Larry Strout wrote for a paper presented at the Newspapers and Community Building Symposium at the National Newspaper Association convention in St. Paul, Minn., today.

When the residents of Pass Christian returned home, "Communication between the city’s residents and the local, state and federal government and volunteers was poor. So, some four-and-a-half months after Katrina, volunteers created the Gazebo Gazette," wrote Strout, who lived in "The Pass" before and after Katrina. The paper started as a free newsletter (first edition at right; click on image to view enlargement) but grew into a newsprint tabloid that now sells for 50 cents a copy.

"This is a story about a city left for dead . . . about a disillusioned journalist and volunteers teaming up to save a newspaper and the community," Strout said as he presented his paper. "One woman took this on her back and carried it." That was Evelina Shmukler, who came to the area to write freelance stories for The Wall Street Journal. After giving up on journalism and returning twice as a volunteer, she helped start the paper in January 2006, assembling it in Atlanta and shipping it to The Pass. Volunteers considered the project temporary, but by the fifth edition it was selling advertising and by Memorial Day, it had become a newspaper.

Shmukler owned it, and she moved to The Pass. By August, she was writing editorials, and in December, she opened an office. Now the paper has been around long enough to cover another big hurricane (Sept. 5 edition is shown; click to enlarge).

"From the very start the Gazette was available online," Strout wrote. "While the evidence suggests that the hard copy version distributed at various locations throughout the city was invaluable for those citizens returning or looking to return to the city, clearly the online Gazette was vital for those who had relocated and either decided not to return or hadn’t made a final decision."

Shmukler wrote on the "Divine Caroline" site of Real Girls Media Network, "Every subscription, every renewal, is an affirmation. And then there are the kind words and nice notes–and the time recently that one of my early subscribers said to me that when they returned to Pass Christian after Katrina and saw the newspaper, they knew that the town would survive. I feel like the luckiest person in the world to know that what I do gives that kind of hope, not to mention a little bit of extra knowledge to make the re-building process easier for my neighbors. . . . I love the ways that my newspaper is journalism and also the ways that it breaks journalism’s 'rules' — for example, by being part of the community, rather than just covering it from a distance." To read the rest of Shmukler's account, click here. For a copy of Strout's paper, e-mail him at larry_strout.att.net.
Written by Al Cross Posted at 9/26/2008 11:32:00 PM