Harlan editor calls for local action in Appalachia; another paper says E. Ky. takes care of its own

Local action is needed to address the problems of Appalachian Kentucky, the managing editor of the Harlan Daily Enterprise wrote in an editorial after making a trip to the state capital and watching the short follow-up to the "20/20" documentary "A Hidden America: Children of the Mountains."

John Henson wrote, "ABC spent some time Friday patting itself on the back" for getting help for the children whose lives showed the failings of their parents and other adults, and the region's social ills. "The part of the follow-up show I liked best was the interview with Gov. Steve Beshear, who said that stimulus funds would be approved to help the region with water projects and new roads." Henson said he was already optimistic about that after he and other members of the local Chamber of Commerce met in Frankfort with new House Speaker Greg Stumbo, who hails from the region.

But as state and federal help is needed, so is local action, Henson wrote. "In order to turn around our situation, Harlan Countians must help themselves and break through the years of inaction and ineffective leadership. There’s been some momentum in that direction, but it’s still more talk than anything else. ... Continuing to improve education in southeastern Kentucky is a must if the next generation is going to avoid repeating the mistakes of the past."

And Henson also targeted personal responsibility: "A big part of the problem in our region goes back to the fact that so many people choose to live on welfare instead of getting a job. I’m not sure how you fix the problem of laziness and lack of pride. The saddest part is the children who can’t help the fact that their parents are useless. Taking them out of the loop could help, if that’s possible, so that the money that should meet the children’s basic needs aren’t used for pills or booze." (Read more) 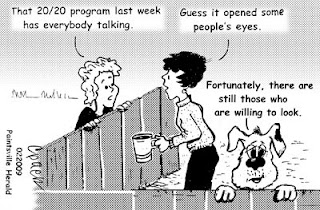 The Paintsville Herald, the weekly newspaper published in the home county of the most prominent figure in the ABC show, football player Shawn Grim, said in an editorial before the follow-up report that the first one should have noted "that while these children might be forgotten by the world, they are certainly not forgotten here at home. If any community in America retains the idea that neighbors take care of their neighbors, it’s in Eastern Kentucky." The paper made a similar point with the above cartoon, a rarity for a weekly. (Read more)
Written by Al Cross Posted at 2/22/2009 11:26:00 AM