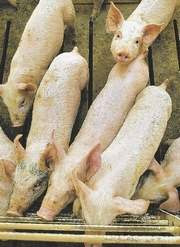 The use of pig manure on Iowa cornfields is helping farmers' pocketbooks and the environment at the same time. The manure is replacing chemical fertilizers for many Iowa farmers because of the rising cost of natural gas used to make chemical fertilizers. Pig manure, an environmental problem if spilled into water or stored in large amounts, now has found a use as a natural fertilizer after years of neglect. (Register photo)

"Spills of manure can foul creeks and kill fish, and large confinements emit hazardous fumes that harm lungs and burn eyes and noses," reports Dan Piller of The Des Moines Register. "When properly managed and applied, however, manure becomes a valuable homegrown resource that can replace fertilizers made from fossil fuels and imported minerals."

Manure had largely been ignored by farmers because of the affordability of chemical fertilizers. Those prices increased from "the $150-per-ton range, above $500 per ton by 2006," writes Piller. "They doubled again to more than $1,000 per ton by last fall when farmers were ready for their post-harvest applications." The roughly sixfold increase in the price of chemical fertilizers forced farmers to consider other options.

The pig farmers have responded to the new demand for manure by increasing the size and scope of pig containments over the past few years. "As recently as 2000, we had to beg farmers to take manure away," said Howard Hill, chief operating officer of Iowa Select Farms in Iowa Falls, whose company finishes about 3 million pigs in confinements in Iowa. "Now, I hear about feuds among farmers about who has first crack at it." According to Iowa State University, a 1,200-head confinement can bring in $50,000 from the once worthless manure produced. That number is up from $17,500 in 2007. (Read more)
Written by AWM Posted at 2/23/2009 11:49:00 AM

I will admit that this is a pretty big step in the right direction. But one has to wonder about the quality of the manure taking into account what confinement pigs are exposed to in terms of antibiotics and such. What I find a little unnerving is the fact that confinement operations have increased do to the demand for manure, if I understood that correctly. Interesting post.