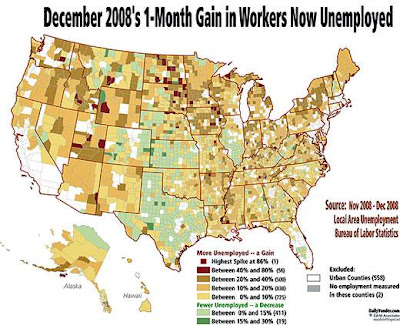 From December 2007 through November 2008, rural counties lost just under 15,000 jobs. In December of 2008 rural counties lost 282,000 jobs, according to the federal Bureau of Labor Statistics. "More than nine out of ten of the jobs lost in rural America since the beginning of the recession disappeared in one month — December 2008," report Tim Murphy and Bill Bishop for the Daily Yonder.

Rural areas in the Great Plains suffered the worst losses. Reasons varied regionally. In Northeast Indiana, recreational-vehicle makers cut back staff after business slowed due to rising fuel prices. Houseboat makers in Southern Kentucky and East Tennessee have been likewise affected. To read more and view a list of the 50 rural counties with the highest unemployment click here.
Written by AWM Posted at 2/25/2009 10:01:00 AM