'The war has started' over Obama ag-subsidy cuts

Philip Brasher, Washington correspondent for The Des Moines Register, suggests the economic and political impact of President Obama's plan to end direct payments to farmers with more than $500,000 in annual sales: "An estimated 81,000 farmers nationwide would lose their payments." What are direct payments? Click here. 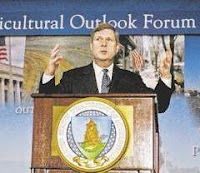 "The cut would save the government about $9.8 billion over 10 years, roughly the amount the administration wants to increase nutrition spending," Brasher notes. Agriculture Secretary Tom Vilsack, right, says the savings would be used to boost nutirition programs and fight juvenile obesity. "If you had a dollar -- one dollar -- where would you put it?" Vilsack asked. "Would you give it to a child for more nutritious eating? Would you give it in a direct payment to a high-income (farm) operation?" (Gannett News Service photo)

Vilsack is a former governor of Iowa. The state's Democratic senator, Tom Harkin, said he had never liked the idea of direct payments, but his Republican seatmate, Charles Grassley, told Brasher that payment limits should not be based on sales. "I'm a farmer, and I know that gross income or sales revenue does not reflect your ability to pay," he said. "Just because I sell a lot of corn doesn't mean that my input costs to grow that corn weren't even higher." Democratic Sen. Kent Conrad of North Dakota said likewise. (Read more)

Other farm programs would be cut, as we first reported here yesterday. House Agriculture Committee Chairman Collin Peterson, D-Minn., told Kara Rowland of The Washington Times that the programs set by last year's Farm Bill shouldn't be reopened now. Such comments were predictable, but the cuts in farm programs were "the most specific" mentioned in Obama's speech to a joint session of Congress Tuesday night, Rowland writes. That suggests he will fight for their adoption, and American Farm Bureau Federation President Bob Stallman seems to see it likewise, telling Brasher, "The war has started."

In his weekly video address today, Obama did not include the farm lobby among "the powerful and well-connected interests that have run Washington for far too long," but said, "I didn't come here to do the same thing we've been doing or to take small steps forward, I came to provide the sweeping change that this country demanded when it went to the polls in November. That is the change this budget starts to make, and that is the change I'll be fighting for in the weeks ahead." To read his text, click here. To watch the address, click here.
Written by Al Cross Posted at 2/28/2009 11:17:00 AM

How do these subsidies affect the kind of ag. subsidies that were at issue in the Doha talks? Can't this be considered good news for free trade and poor agrarian countries?