Corps of Engineers cutting trees on levees, getting opposition from landowners and outside experts

"The Army Corps of Engineers is on a mission to chop down every tree in the country that grows within 15 feet of a levee," out of fear that the roots could undermine the flood-prevention structures and in response to criticism after Hurricane Katrina, reports Cain Burdeau of The Associated Press. "But environmentalists and some civil engineers insist the trees pose little or no risk and actually help stabilize levee soil."

Burdeau reports from Columbia, La.: "Thousands of trees have been felled already, though corps officials did not have a precise number of how many will be cut. ... The saws are buzzing despite the outcry from people who say the trees are an essential part of fragile river and wetland ecosystems. ... Experts outside the corps say a tree has never caused a U.S. levee failure." The corps says trees caused a dam to fail in Georgia more than 30 years ago, and "also wants to get rid of trees for safety reasons. A treeless levee is easier to inspect and repair during a flood." Larry Larson, executive director of the Association of State Floodplain Managers, based in Madison, Wis., told Budreau, "If you're going to have a levee, you have to be able to maintain a levee and make it safe." 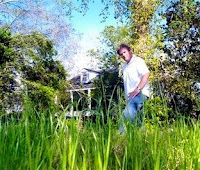 Sometimes, the engineers back off. In Columbia, hundreds of sycamores, live oaks, elms, pines, cedars, magnolias and crepe myrtles surrounding an 18th-century French colonial estate and plantation were marked for the chain saws, but the corps finally agreed to let the local levee district cut only a few dozen. (AP photo by Kita Wright: John Youngblood on the levee in front of his home on the plantation.) In California's Central Valley, "The corps sought to clear oaks, cottonwoods, willows and other vegetation from 1,600 miles of levees," AP reports. "State wildlife officials complained that the policy would destroy habitat, and residents in Sacramento and elsewhere objected that it would have turned rivers into little more than barren culverts. The corps eventually dropped the idea." (Read more)