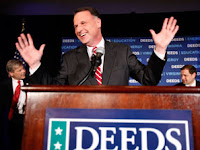 He owns a mule named Harry S Truman and comes from a county so small that it doesn't have its own newspaper. But state Sen. Creigh Deeds won the Democratic primary for Virginia governor tonight, thanks in large measure to an endorsement from The Washington Post. That jump-started Deeds late in the race, and he routed former Democratic National Chairman Terry McAuliffe and former state Delegate Brian Moran. He will face Attorney General Bob McDonnell, who was unopposed for the Republican nomination. (AP photo)

"The contest comes freighted with personal drama: Four years ago, Deeds lost the attorney general’s race to McDonnell by just 323 votes," note Andy Barr and John Harris of Politico. "It most likely will also carry a national echo. Virginia governors' races, like New Jersey’s, always attract attention from political devotees because they are one of the few games in town in odd-numbered years." Deeds backs abortion rights and gun rights. For an item on a Post profile of Deeds (whose first name is pronounced "Kree"), click here.

Deeds "was written off as a serious contender just a few weeks ago," reports Michael Sluss of The Roanoke Times. "Moran and McAuliffe tried to blunt Deeds’ momentum by attacking his legislative record, particularly his support for gun rights and his vote for a proposed gas tax increase to fund transportation improvements. Deeds defended his stances and said his rural background and centrist philosophy would better position him to forge compromises on difficult political issues such as transportation funding and expanding background checks at gun shows." (Read more)

Times Senior Editor Wayne Yancey writes, "I don't know whether newspaper endorsements matter much in a general election, but in a primary, well, clearly a lot of Democrats in Northern Virginia paid attention to the Post. That gave Deeds -- from tiny Bath County -- pretty powerful street cred in the suburbs." (Read more) The endorsement "apparently helped give the otherwise obscure Deeds a second look in the vote-rich Washington suburbs and helped bolster his claim that he would be the most electable Democrat in the fall," Barr and Harris write. "Nearly as striking as Deeds’s starburst was McAuliffe’s fizzle. He had the most famous name, the most money to buy ads and organization, the most support from organized labor and by far the most dynamic personality. But, in a stock phrase of political operatives, sometimes the dogs just won’t eat the dog food." (Read more)

McAuliffe tried a rural issue, calling for making energy from the chicken manure that pollutes Chesapeake Bay. He got 26 percent of the vote, barely ahead of Moran, and carried very few jurisdictions. But two were in the Appalachian coalfield: Wise County and its independent city of Norton. For the Post's coverage, which includes an interactive map of results, click here.
Written by Al Cross Posted at 6/09/2009 10:34:00 PM