Areas that mine and burn coal may be more susceptible to flu because of arsenic, study says

A study has found that even slight arsenic exposure can weaken the immune response to H1N1 influenza, Facing South reports. Arsenic is found naturally, mostly in minute amounts, but is also a pollutant emitted in large quantities by power plants and industrial facilities.

Conducted by the Marine Biological Laboratory and Dartmouth Medical School, the study found arsenic delays the immune system response of those who contract the H1N1 virus, increasing the risk of death. While parts of the United States have naturally high levels of arsenic in groundwater (map), the role of industrial pollution in the release of the pollutant is a cause for concern and the researchers concluded that even low levels of arsenic exposure can result in decreased immune responses. 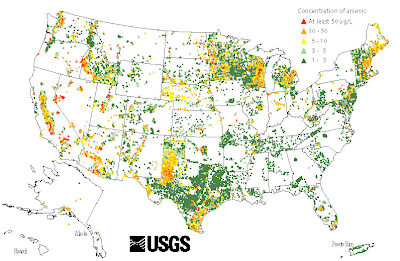 “Of the top 25 industrial emitters of arsenic and arsenic compounds via point-source air emissions (that is, releases through confined streams like smokestacks) in 2007, 22 were coal-fired electric power plants, according to the most recent Toxic Release Inventory data available” from the Environmental Protection Agency, Facing South reports. Industrial facilities like copper refineries in Texas and Utah are also large emitters of arsenic. ISS found that the pollution was greater in the South, affecting Kentucky, North Carolina, and Georgia, among others. (Read more)
Written by Aubrey Krekeler Posted at 6/12/2009 01:11:00 PM